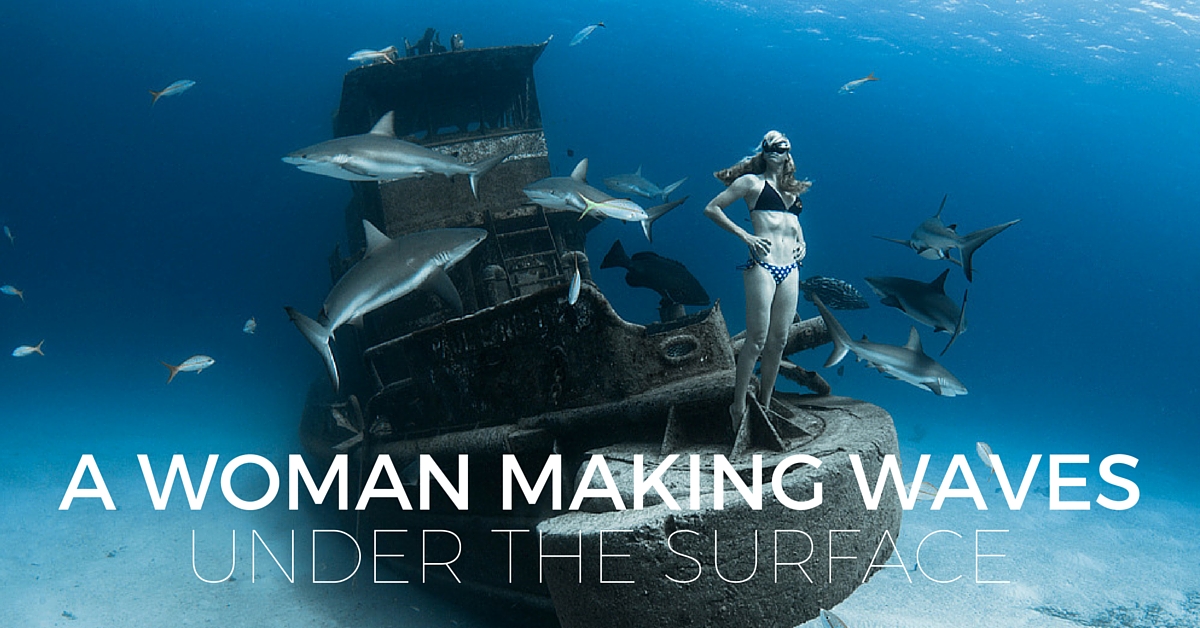 Meet Liz Parkinson, a woman making waves UNDER the water!

Liz is a woman with many talents: a freediver, a dive instructor, a captain, and a shark and ocean conservationist. She fell in love with the ocean at a young age and has been fortunate enough to turn her passion into a viable career. Living on the boat for the past few years, she has spent plenty of time on and under the water! I am so honored to have interviewed this inspiring woman! Check it out below.

Where are you from?

I was born in Windsor, just outside London in the UK, however I grew up in Johannesburg, South Africa.

Where do you live now?

I currently live on the island of New Providence, Nassau, Bahamas.

Which came first, fascination with sharks or love for freediving?

I have been a competitive swimmer throughout my life, but I grew up in a land locked city. Holding my breath was something I did everyday, training hard and pushing those physical boundaries. When I finished my University and swimming careers, I got into the diving and ocean worlds. Although I had always been interested in sharks my personal experience led me to Freediving. So I guess Freediving came first and sharks just made it better. Describe your very first encounter with a shark.

The first time I saw a shark I was with my Dad and Uncle on a ferry approaching the Irish coast. We were out on the deck early in the morning right up on the bow. Looking down we thought we saw a pod of dolphin but it was a massive Basking shark with its mouth wide open, coming up through the wake. I have yet to dive with those guys but it is definitely on my bucket list!

What inspired you to want to work with these amazing creatures?

Sharks have always fascinated me. I think as a kid I was just intrigued and challenged by what sharks are and the stereotype that surrounds them. I wanted to learn about them and have the opportunity to judge them for myself. I have always had that adventurous free spirit, and the need to run against the grain. Society says ‘no you cant, it is too dangerous’, so for me that is all the invitation I need!

Video by the Travel Channel.

When did the idea of working with sharks become a viable career option for you?

As a dive instructor, working in the ocean, sharks have always been pretty much a day to day experience, however, it was not until I came to the Bahamas and started working at Stuart Cove’s Dive Bahamas, that the opportunities to work with sharks in a different capacity came up. Stuart Cove’s is a leading company in Shark education and conservation. Along with the Bahamian Government and the Bahamas National Trust in 2012 the Bahamas was made a Shark Sanctuary.

Working with sharks has many different avenues. For me the best one is taking guests out SCUBA diving with them. There is nothing better than experience, and seeing the reactions and hearing the excitement from people when they come up from their dive, really does make all the hard work worth it!

Have you ever had a scary encounter? If so, what went wrong?

I often get asked if I am scared of sharks. I am not scared of them but I definitely respect what they are and what they are capable of. The minute I become complacent and forget this I won’t dive with them anymore.

Working with wild animals always has a certain level of danger attached to it. I have been bitten and bumped several times. However I always dive (especially freedive) with multiple safety divers around me and when I am feeding sharks I wear protective chainmail. This not only protects myself but to be respectful of the situation I put myself in with the sharks, and in the long term protects them too. Any thoughts on “Shark Week” or “Jaws”?

The media is a powerful tool, and in the case of sharks it has not always been very favorable. When ‘Jaws’ came out in the 70’s, a monster was created, and still 40 years later this film haunts people. I loved reading Peter Benchley’s books, but I do wonder if sharks would have a slightly different rap if Steven Spielberg had not done such a great job!

As for ‘Shark Week’, I think that this is a bit of a double edge sword. Discovery has portrayed sharks in a very negative light, but on the other hand it is the most watched week of television by the public in the year. For one week, sharks are in the limelight. It is sometimes the closest a lot of people get to sharks. It is exciting for many, a small porthole that allows them a glimpse into a mysterious world. I have personally been involved in several episodes, and I constantly get approached by adults and kids asking about sharks and wanting to come and experience them with me, once they have seen the sharks on TV. That being said I certainly do not agree with everything that is broadcasted. Some of it is so ridiculous. It is a bit scary how much control the media has over the public, and what they make them believe. This is where the danger lies!

Spending so much time underwater, have you noticed any physical effects of global warming?

Global Warming is a huge environmental topic. Personally, I do not see the effects here in the Bahamas, but that does not mean that elsewhere in the world this is not the case.

This being said everywhere people are fighting local issues that can and do have detrimental consequences to coastal areas. I am a firm believer that the best place to start is at home. I am a member of several non-profits that work towards debris clean ups and plastic monitoring. It is the constant and continuous work that helps, all serving the bigger purpose. Can you describe what it means to be a shark conservationist?

A shark conservationist is someone who uses their voice driven by a passion and desire to help. They are people who speak for an animal who can’t, an animal who is completely misunderstood, and one that is so vital to the wellbeing of our oceans.

What can the average person do to make a difference in terms of helping sharks, having a positive impact on the marine environment or even just reducing their negative impact?

The Human Footprint is a big one but there is a lot that an individual and groups can do to help reduce their own. Be conscience of your plastic use, buy organic foods, use sustainable products, recycle, carpool, participate in garbage clean ups around your neighborhood, the lists go on and on. Global Warming and Climate Change are huge overwhelming topics that affect us all, but by doing your part in a way that is viable, you do make a difference.

First image by Lia Barett and adapted by me.

Right image by Pia Venegas, adapted by me.

You can find Liz and follow her adventures on Social Media: Enjoy this interview series? Make sure to sign up for more stories delivered to your inbox once a month! (Last Name Optional)